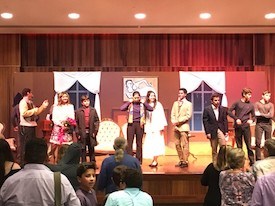 Drama, the essence of entertainment
By: Kamil Berríos

¹All the world’s a stage
And all the men and women merely players.

Many wish to bring alive what we see through the lens of a camera. Many wish to be transported to a different time from which you could watch events as well as participate in them. ²Drama kindly stops for you and drives you slowly around the corner between the past and the future. She knows no haste. So put away your labor and your leisure too, for Her Civility. The Drama Club of Colegio San José (CSJ) cordially invites you to drive away with us and explore a different dimension of entertainment. We are here to give you a show.

Rehearsals, logistics, audio, sound effects, music, recordings, stage set, props, wardrobe, rehearsals and more rehearsals are part of our preparation to deliver a sense of truth on stage. From Alberto Muñiz (CSJ 2014) and his authentic leadership as the director in Vejigantes, Esta Noche Juega el Joker, and Bienvenido Don Goyito, to Sebastián Sánchez (CSJ 2017) and his majestic performance as Ebenezer Scrooge in A Christmas Carol, gifted students from CSJ offer the art of performing and delivering a sense of truth in their voices.

This year, we decided to ³climb the young ambition’s ladder and proudly presented the theatrical play The Mousetrap, written by the one and only Agatha Christie. This year, we embraced the exquisite articulation of Edgardo Martínez (CSJ 2022) in his role as Giles Ralston. Let us not forget the intensity conveyed by Gabriel Nieves (CSJ 2017) as Sergeant Trotter and the enhanced sophistication of Major Metcalf interpreted by Alejandro González (CSJ 2017). Marcos Padrón (CSJ 2019) also conquered his debut as Paracini, a foreigner whose car overturned in a snowdrift and ended up staying at Monkswell Manor, the guest house where the story took place. Experienced in dramatic monologues, Sebastián Sánchez brought to life the whimsical character of Christopher Wren. This year, we were blessed with flawless performances by Esther Ortiz (CPN) as Mollie Ralston, Amanda Calderón (AMR) as Miss Casewell, and Graciela Colón (AMR) as Mrs. Boyle. This year, lovers of drama enjoyed the thrilling atmosphere of solving a crime in The Mousetrap.

As everyone can imagine, all this production could never be accomplished without the help of many talented people. ⁴So lend me your ears and I’ll sing you a song and I’ll try not to sing out of key. First, our moderator Luz Domínguez, who consistently leads the team of actors, has zealously carried the burden of directing theatrical plays. Roberto Dávila (CSJ 2017) and José Villanueva (CSJ 2017) as backstage directors have shown their commitment to the Drama Club by participating in every play since 2012. When the play starts, they are in charge. Gaining experience, Giovanni Pagani (CSJ 2022) joined the backstage crew to understand the drama behind the curtains. On the other hand, something different happened this year in The Mousetrap. Besides the incredible effort our students did to memorize all those lines and interpret their characters, were you able to appreciate the beautiful stage set designed by Prof. Melvin Robles? His students Eduardo Montañez (CSJ 2018) and Ricardo Soltero (CSJ 2017) worked together with the professor in order to take us back to the 1950’s. “Best stage set ever,” as expressed by actor Sebastián Sánchez. Additionally, the famous antique store called Cosas de Ayer y Hoy, located in Paz Granela Avenue in Santiago Iglesias, gave us the opportunity to rent furniture and many other antiques to give life to the scenery.

Always present in school activities, the Audiovisual Club from CSJ played a main role in The Mousetrap. Moderated by Prof. Carmen Camacho, this club shows mastery in technology. Let us start with Ian Pérez (CSJ 2019) and Jorge Santos (CSJ 2019), leading the team with their intellectual composure. Sebastián Serrano (CSJ 2019), also a member of the Drama Club, assisted the Audiovisual Club with assertiveness and efficiency. The students Leonardo Morales (CSJ 2020) and Luis Benítez (CSJ 2019) worked in harmony with us to execute an overall great performance. We can only express our gratitude for everyone’s hard work.

This is what ²Drama kindly stops for. She stops for art. She stops for talent. She stops for entertainment. Once again, we feel grateful for having the opportunity to share our voices through art. Finally, the Drama Club of CSJ wants you to be part of this journey and support us next semester when we present another show. Thank you and ⁵Adieu! for once again the fierce dispute betwixt entertainment and education must I burn through.

1: William Shakespeare’s All the World’s a Stage

2: Emily Dickinson’s Because I could not stop for Death

4: The Beatles’ With a Little Help from my Friends